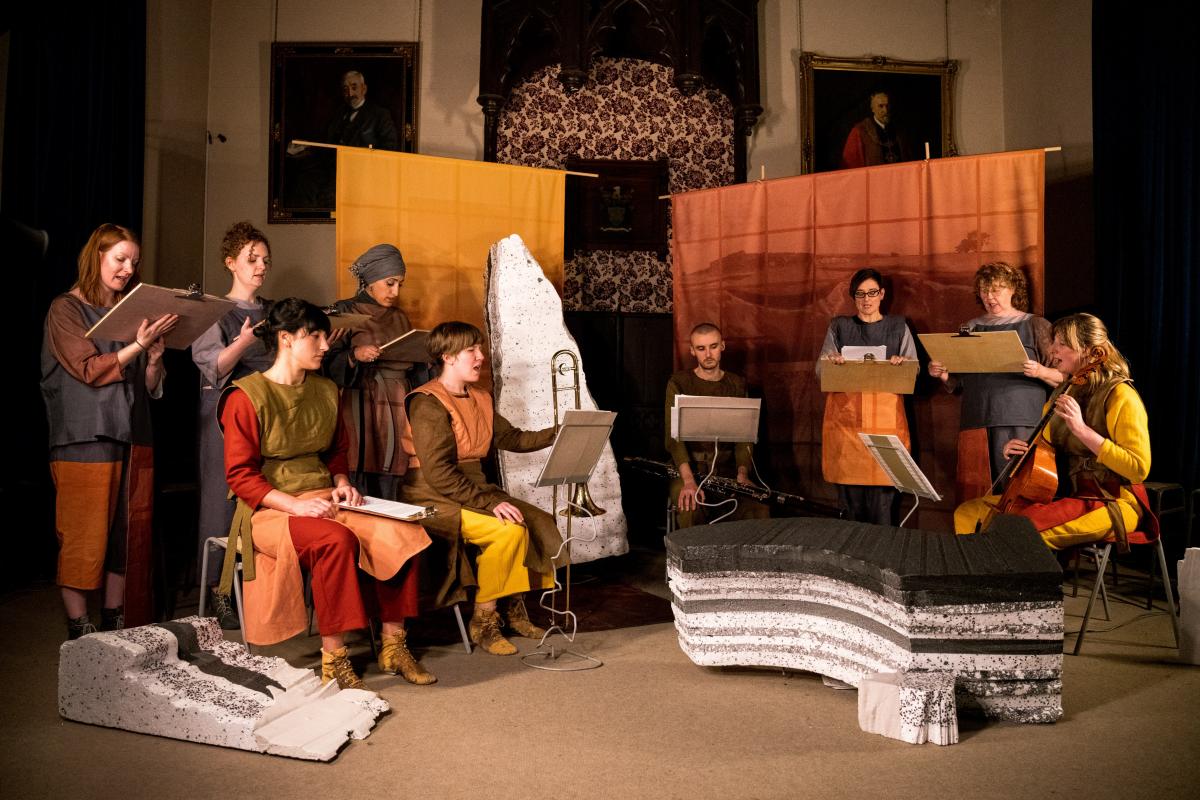 made in response to an archaeological dig at Malkin Tower Farm, Pendle.

Musicians, vocalists and sound-emitting sculptures offer a creative interpretation of landscape, history and the process of excavation.

In June and July 2018, Nastassja Simensky and Rebecca Lee were invited by In-Situ and Pendle Hill Landscape Partnership to be artists-in-residence for an archaeological dig at Malkin Tower farm.

Drawing on field recordings, archival material and landscape mapping technologies, the work is a creative response to archaeological excavation with themes of material and social stratification and changing land use.

The last two weekends saw four performances of Nastassja Simensky and Rebecca Lee’s ‘mobile micro opera’ made in response to the archaeological dig at Malkin Tower Farm. It was our first completed commission developed from an artist residency as part of The Gatherings strand of the PHLP.

The performances took place in four venues around Pendle. The first venue was In-Situ’s new home: The Garage, at Northlight in Brierfield. The audience was a mixture of locals from Lancashire and Yorkshire, and some people had travelled up from London. On the Sunday there was a matinee performance at Clarion House, Roughlee where the audience was a mixture of people who had booked especially, as well as a few people who were on their Sunday walk. The following weekend saw a full house at Clitheroe library, and a special sharing aimed at younger audiences at Marsden Heights community college in Nelson.

The performance itself was a 40-minute combination of live music with instrumental and vocal passages, field recordings gathered from the dig and texts that drew together creative writing and interviews with the archaeologists that were read aloud by Nastassja. The musicians and singers performed against a backdrop that represented the dig site, and were kitted out in bespoke costumes that referenced 17th Century everyday life.

Each performance was adapted to the venue in which it was performed and followed by a Q & A session with the artists, musicians and invited guests. At Clitheroe, Rick Peterson, senior lecturer in Archaeology at UCLAN and the Malkin Tower dig manager, talked about what it was like working with artists in residence and the opportunities presented by having a creative interpretation of the dig alongside.

The next phase of the project for Nastassja and Rebecca will be making a film that draws together the material and footage they gathered from the dig with documentation of the performances.

Keep an eye on www.in-situ.org.uk for updates and info on the other arts activity as part of The Gatherings strand.